Home » Patient Info » Patient Testimonial » I am telling EVERYONE about Dr. Sciortino and the SuperPath procedure.

I am telling EVERYONE about Dr. Sciortino and the SuperPath procedure.

In early 2014 I had traditional posterior approach total right hip replacement. While the eventual result was very good, the recovery was long and painful. I was fortunate to have a family member who was willing to move into my home for ten weeks to assist in my recovery. For at least the first four weeks I needed help with absolutely everything - even getting out of bed was almost too much to bear. In June 2016 Dr. Sciortino replaced my left hip using the SuperPath procedure. I was released from St. Luke's Hospital the day after surgery. My son was driving me home from the hospital when he had a diabetic reaction, so I actually had to drive myself home - without any problem at all! I stepped up into my SUV (an automatic transmission), got behind the wheel, and drove home! Of course, I did not drive again until one week after surgery. The day after surgery I was easily able to climb 16 steps to my bedroom - one step at a time. My recovery at home lasted one week, after which I went to outpatient therapy. I was able to perform exercises at the two week mark that I was only able to do after 12 weeks following the traditional approach. I am telling EVERYONE about Dr. Sciortino and the SuperPath procedure. The ONLY pain I have had was the incision, and that was minimal - no muscle pain AT ALL. I wish I had known about SuperPath when I had the right hip replaced! Even though the results of both surgeries is the same after a year or two, who wants to recover for 12 weeks instead of one or two! 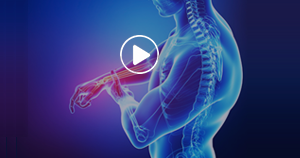 Educational Videos
Our Happy Patients
In The News
Practice Location